I remember when I was little, my Mother used to give us either homemade baked rice pudding warm from the oven with that lovely golden skin on top, or we’d have Ambrosia Creamed Rice out of a tin as a quick and tasty pud.  Now she makes a delicious Swedish version (with loads of chopped almonds) and for the last 5-10 years it’s become a tradition to have it on Christmas Eve with a red fruit/cherry compote.  The creamy, deliciousness of rice pudding is something that I think people either love or loathe, and I definitely love it.

Arroz con leche (or rice with milk) is the South American/Spanish/Mexican version of rice pudding.  This dish is found all over the world, with regional varieties found throughout Asia, Europe, Nordic countries, the Middle East, and Central and South America.  Some are baked, some cooked on the hob, some include orange or lemon zest, raisins, cinnamon, nutmeg, but they all include rice and milk (whether that be evaporated, condensed or normal)!  It also seems to be a staple all over South America, so I picked this as my recipe for Panama.

I loved the three months I spent in South America about eight years ago, although I didn’t ever get to Panama.  It is such a diverse (and huge) continent that it would take an age to do every country within it justice.  I only really scratched the surface, so hopefully I’ll get to go back to the beautiful continent one day.

I have to confess that I can’t find the original blog that I found this recipe on, so whoever’s recipe this is, I apologise for not accrediting it to you – it was not at all intentional.  It amazes me how many blogs are out there with people sharing their passions and tips, and it makes my challenge so much easier when I know I can find ideas of dishes to cook from most countries by simply searching online.

This was a yummy dish, very sweet, so you don’t need loads.  For this particular dish, I would recommend adding raisins as well (do this while it’s cooking) as I think it would improve it.  I would take it out of the fridge to get to room temperature before eating as it was quite solid when cold.  I reckon you should try making it with pudding rice or Spanish paella rice as long grain rice was still a little rice-like/nutty (if that makes any sense?).  I think pudding rice would result in a slightly softer pud, however, it was still delicious. 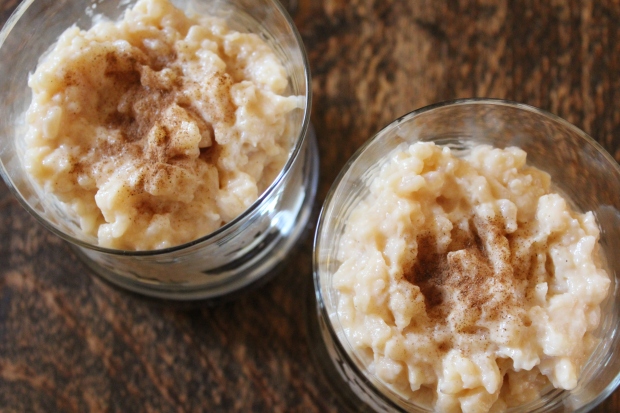 In a small saucepan, add water and cinnamon sticks, bring to the boil and simmer for about 10 minutes. Set aside and remove the cinnamon sticks.  My cinnamon sticks had disintegrated a bit so use a sieve to get rid of the bits if you need to.

Place the rice and the cinnamon water in a large saucepan, over medium heat and cook for around 5 minutes.

Reduce heat to medium low. Add the remaining milk and condensed milk.  Stir with a wooden spoon.  Cook for about 1 hour, stirring regularly to stop it sticking to the bottom.

Remove from heat, and let it cool at room temperature.  The consistency should be very creamy.  Once cold, keep in the fridge until ready to eat.

I recommend taking it out of the fridge about 30 mins before you want to eat it, so it’s not quite so cold (and means it’s a bit less solid!).  This recipe did recommend serving cold, but I tried a helping warmed up and it was yummy too! 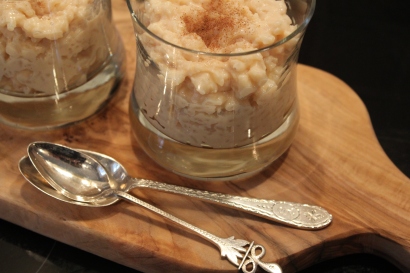