I love Jamaican Ginger Cake.  We used to have it loads growing up – the dark, sticky, squidgy McVities version – innocent looking in it’s plastic wrapping, but always tasting delicious.  I can’t believe I didn’t think of making it before for this blog.  It didn’t really occur to me until I decided to make some cakes for our week away in the Lake District.  My parents have a timeshare in the Lakes and they go every year, and I love it when we get invited.  It’s such a beautiful place and you really feel like you’re getting away from it all.  My Mother normally does a bit of cooking (it’s self-catering) in advance and I thought I’d help out by making cakes!  After a day’s walking, we always feel like we have earned our cup of tea and cake, so much better to have homemade cakes!

Anyway, my Father loves gingerbread so I thought I’d make some, and then I had a lightbulb moment and realised it could be my entry for Jamaica.  I have actually been wondering why it’s called Jamaican Gingerbread, so I did a bit of research to find out, but I have been disappointed in my sleuthing skills.  I haven’t been able find anything that really explains whether Jamaican Ginger Cake is from Jamaica and why it became a supermarket staple, but it’s still delicious so I don’t mind!  If anyone can shed any light, I’d be grateful.

Not many photos this time as didn’t take any when we were eating it in the Lakes – we were too hungry!

My version, based on an amalgamation of recipes, including Mary Berry’s and Lisa Faulkner’s.

A 900g loaf tin, greased with butter and lined with greaseproof paper.

Heat the oven to 180C. Sift the flour, bicarbonate of soda, ginger, cinnamon and mixed spice together in a bowl.

Add the diced butter and rub into the flour mix.

Spoon the treacle and golden syrup into a small saucepan and warm gently until melted and runny but not hot. Set aside until lukewarm. It’s easiest to weigh it directly into the saucepan.

Put the sugar and milk into another pan and heat gently, stirring well to dissolve the sugar. Leave to cool until lukewarm.

Then whisk the milk into the flour mixture, quickly followed by the treacle mixture and the egg, to make a smooth thick batter.

Then stir in the stem ginger before pouring the mixture into the loaf tin. Bake for about 45 minutes or until a skewer inserted into the centre of the loaf comes out clean. Run a round-bladed knife around the inside of the tin to loosen the loaf, then set the tin on a wire rack and leave the gingerbread to cool completely before turning out.

If you can wait, wrap the cake in clingfilm or foil and leave for a day or two before eating – the flavour develops and it gets even more sticky. 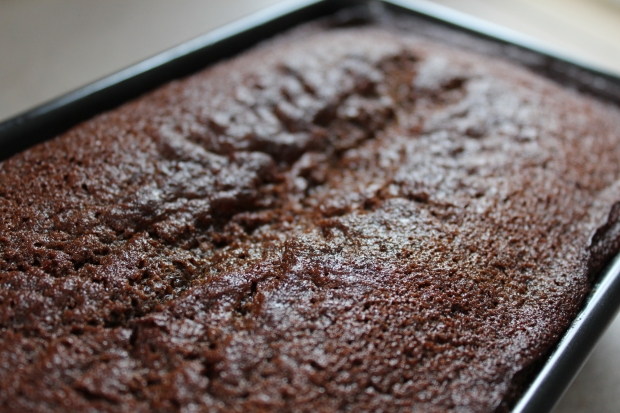